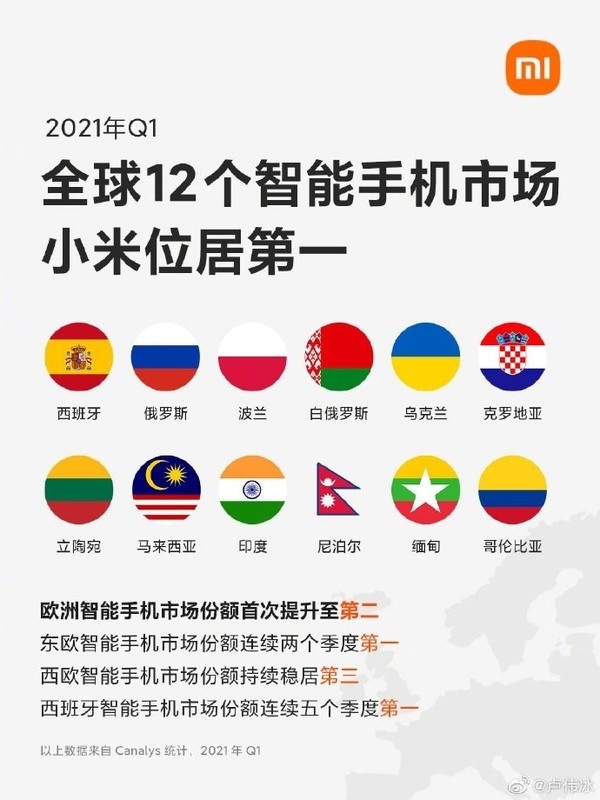 Xiaomi’s top 12 smartphone markets are Spain, Russia, Poland, Belarus, Ukraine, Croatia, Lithuania, Malaysia, India, Nepal, Myanmar, and Colombia. In the previous report of “BrandZ Top 50 Global Brands in China in 2021″ released by Google, Xiaomi ranked fourth with a brand power score of 1831. So we can say it has been recognized by the global market and Xiaomi products have also been recognized by consumers.
Earlier, Xiaomi Group announced its 2020 performance report. In 2020, smartphone revenue reached 152.2 billion yuan ($23.69 billion), a year-on-year increase of 24.6%; global smartphone shipments for the year were 146 million units, a year-on-year increase of 17.5%; the revenue was 245.87 billion yuan ($38.27 billion), of which, the overseas market revenue was 122.4 billion yuan ($19.05 billion), accounting for 49.8% of the total revenue; it ranked first in the Eastern European market for the first time.
In the fourth quarter of 2020, Xiaomi ranked third in the world. This is the first time in six years. What supports Xiaomi’s return to the third place is its achievements in overseas markets, especially the European market. In recent years, Xiaomi has been conquering the high-end market and its average selling price overseas has been increasing. The starting price of the Xiaomi Mi 9 in China is 2,999 yuan ($467), and the version with the same configuration in Europe costs 499 euros (about $610); the domestic starting price of Mi 10 reaches 3999 yuan ($622), and the same configuration version in Europe costs 799 euros (about $976). Consolidating the market share of low-end products, impacting the high-end market, and building a high-end brand image are the most important tasks for Xiaomi Global.