On July 29, the latest report released by StrategyAnalytics showed that global smartphone shipments in Q2 2021 increased by 11% year-on-year to 314.2 million units. This is the second highest annual growth rate in recent years (second only to 28% in Q1 of 2021).

In Q2 of 2021, Samsung continues to maintain its leading position with an 18.2% market share. However, Samsung’s annual growth rate (increased by 5.4% year-on-year) was the bottom of the top five vendors.

Strategy Analytics believes that fierce competition and supply restrictions from Chinese manufacturers have affected Samsung’s performance in the quarter.

For the first time in history, Xiaomi ranks among the top two in the world. Its global smartphone shipments are 52.8 million units and its market share is 16.8%.

Among the top five manufacturers, Xiaomi has the highest annual growth rate (+85.3%). Xiaomi quickly and successfully captured the aftermath of LG’s withdrawal in Latin America and Huawei’s presence in Europe. 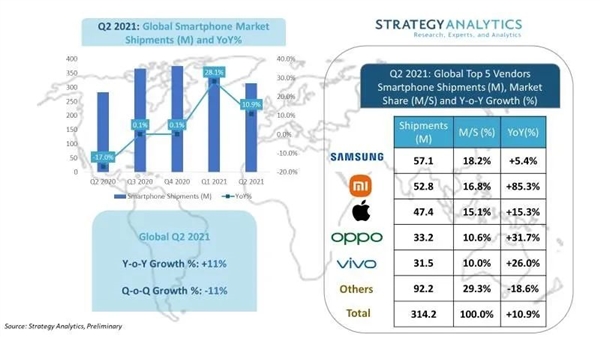 StrategyAnalytics estimates that China has surpassed the United States to become the largest single market for Apple’s iPhone in this quarter, for the first time in history. The iPhone 12 series supporting 5G continues to be popular with loyal iPhone fans.

Chinese manufacturers OPPO and VIVO ranked fourth and fifth with 10.6% and 10.0% market shares respectively. Both manufacturers have witnessed double-digit annual growth rates, mainly from China, India and other overseas markets.