A few days ago, we learned that Redmi’s first gaming phone had been scheduled to be released on April 27. Its official name is the Redmi K40 Game Enhanced Edition. However, the series may also have a standard version. Today, we got tons of information concerning this series. So let’s connect the dots.

Judging from the running score data published by Master Lu, this new machine will come with a MediaTek Dimensity 1100 processor, 8GB+256GB storage and a screen resolution of 2400×1080. Its comprehensive performance score of 758,248 points.

The Dimensity 1100 is built with a 6nm EUV process and consists of 4 large A78 cores clocked at 2.6GHz and 4 small A55 cores clocked at 2.0GHz. It integrates the G77 MC9 graphics engine, which supports up to 144Hz screen refresh rate and 100MP camera.

According to the official introduction, the transistor density has been increased by 18% compared with the previous generation, and the power consumption can be reduced by 8% under the same performance conditions. 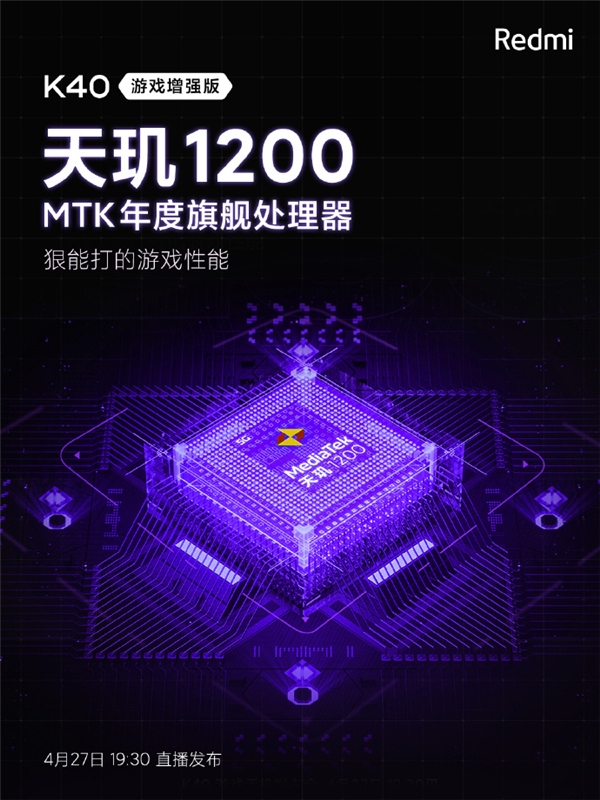 This morning, Lu Weibing, general manager of the Redmi brand, announced the running score information of the machine as well. It showed that the Redmi K40 Game Enhanced Edition has a performance score of 724,000 in the Antutu V9. This score is equal to Qualcomm’s flagship Snapdragon 870 chip. So we can say that the Dimensity 1200, which is MediaTek’s strongest chip at the moment, is comparable to the pseudo-flagship of Qualcomm. 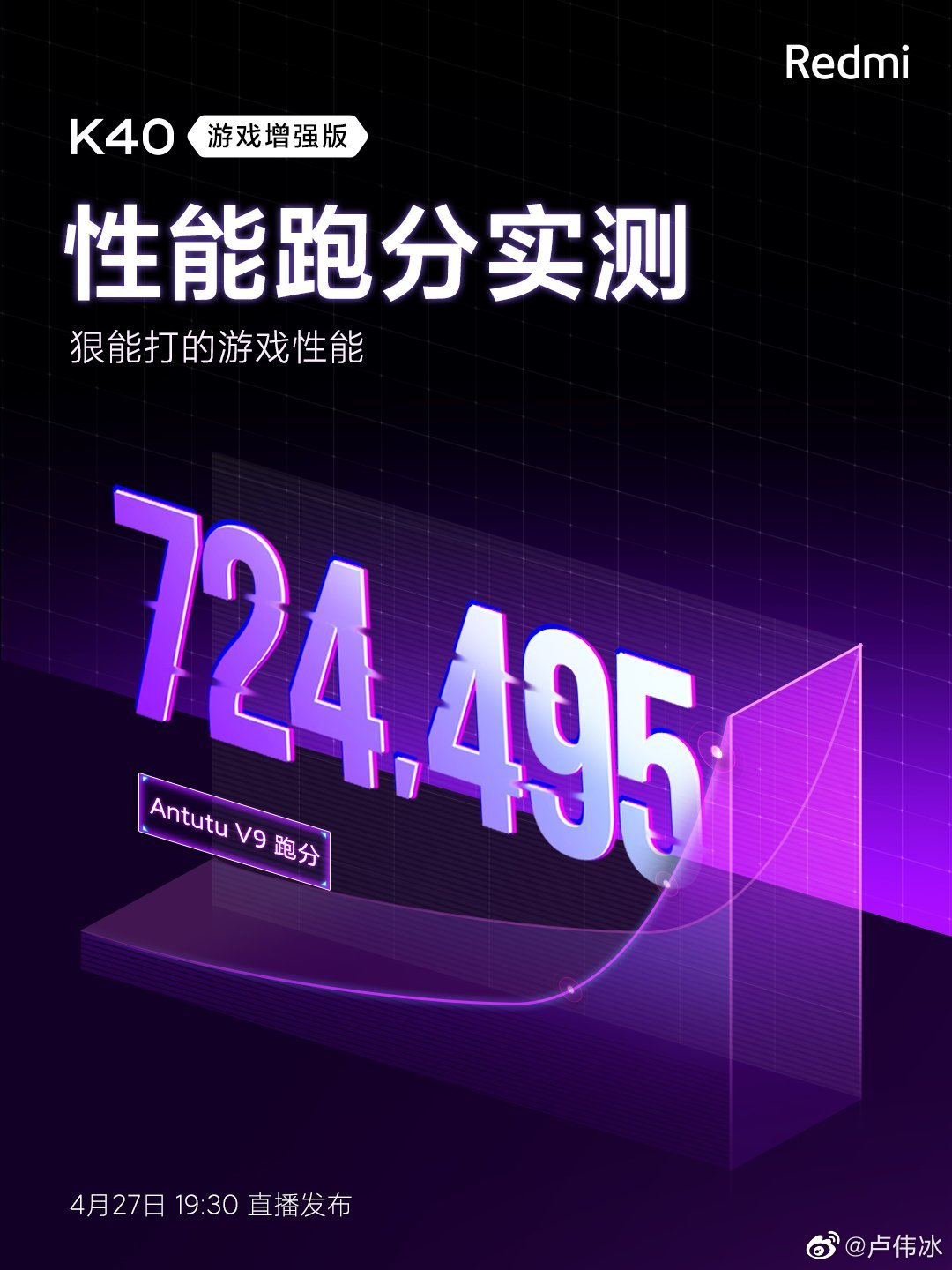 We should also mention that after the phone is out, Redmi will become the first manufacturer that offers smartphones with all three most powerful chips (Redmi K40 – Snapdragon 870, Redmi K40 Pro – Snapdragon 888). 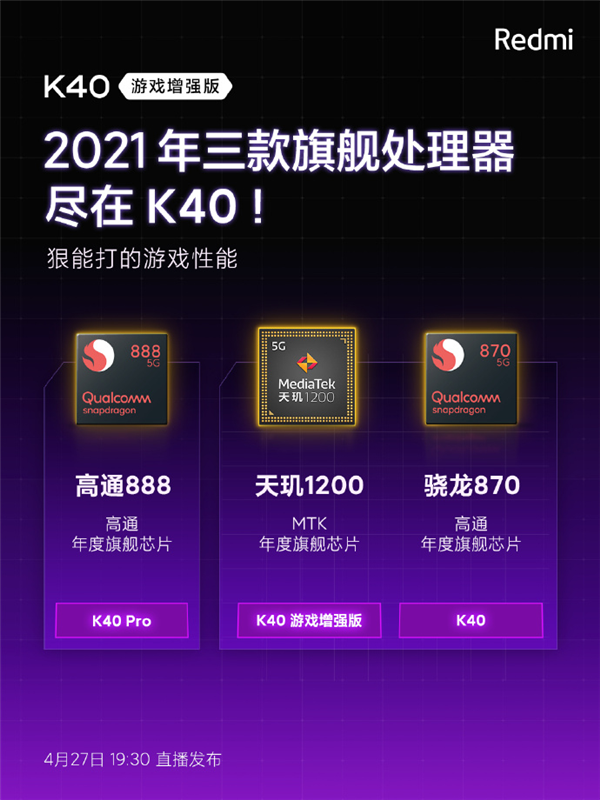 In addition, the Dimensity 1200 also implements end-game ray tracing technology for the first time on a smartphone. The rendered game screen is brighter and the shadow effect is more realistic, which can bring mobile game players a game screen comparable to the real one.

By the way, today, Redmi officially announced that the Redmi K40 Game Enhanced Edition fully supports the 90-frame high frame rate mode of “Honor of Kings”. In February of this year, “King of Glory” released an update, adding 90Hz support, bringing players a smoother and more exquisite picture. The first batch of models with a 90Hz frame rate include Mi 11, Mi 10 Pro, Mi 10, Black Shark and so on. Players can turn on the ultra-high frame rate mode in the game settings interface. 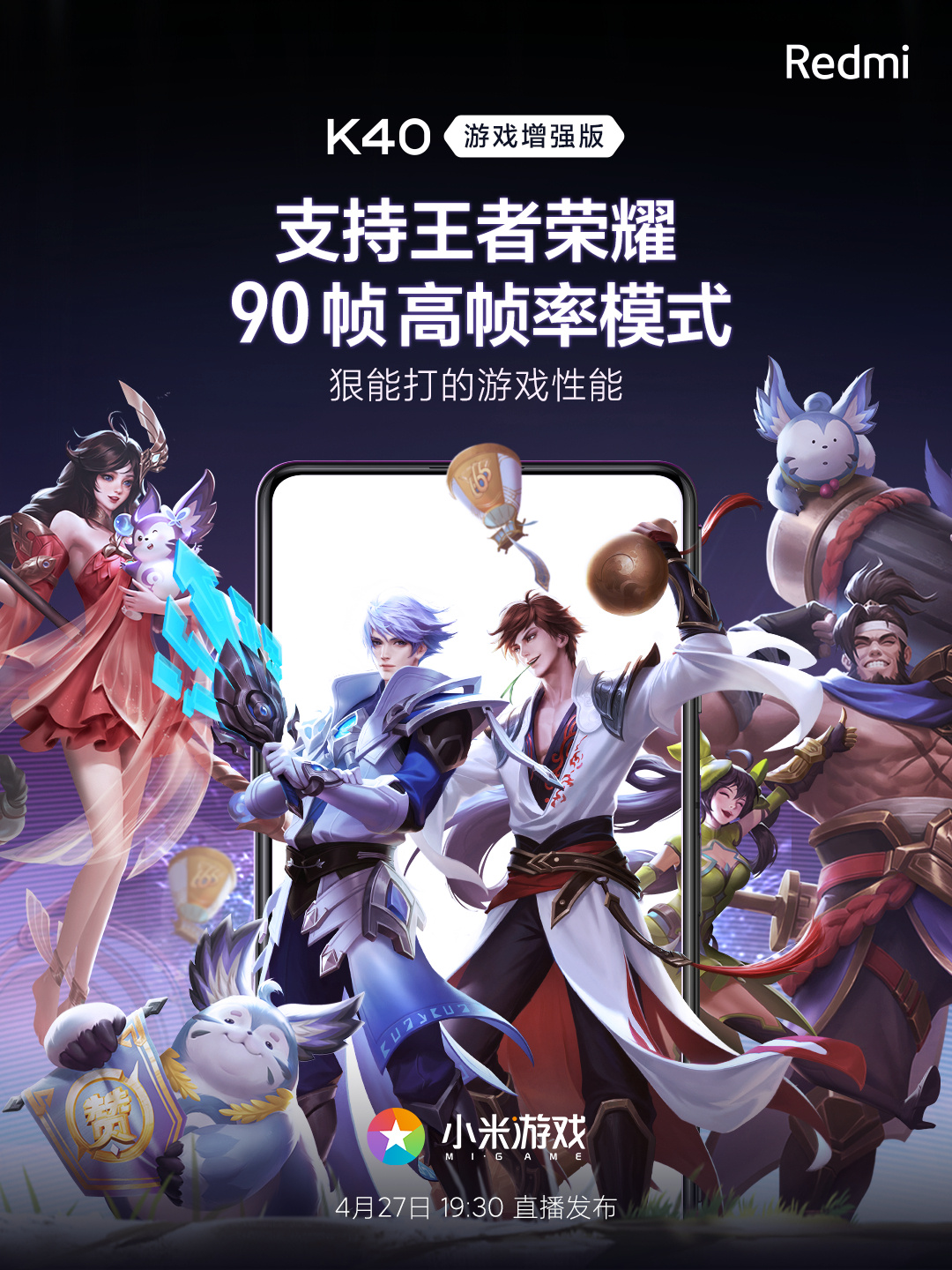 The Redmi K40 Game Enhanced Edition not only has a VC liquid cooling and a super large area graphene necessary for e-sports, but also overcomes an industry problem: heat dissipation in the antenna area.

Redmi said that the new machine uses a new material from the space shuttle for the first time, which is hexagonal boron nitride, also known as “white grapheme”. 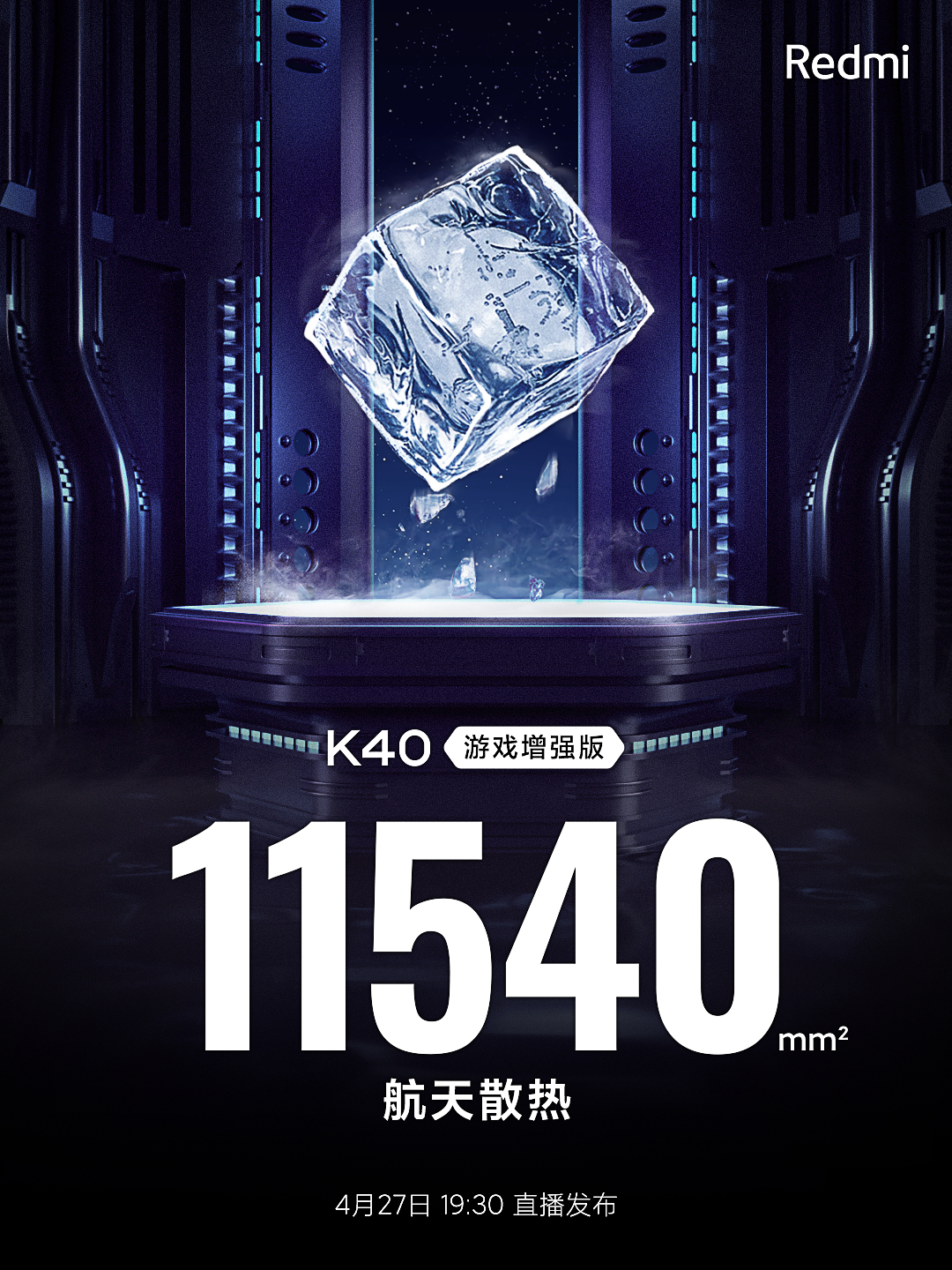 Hexagonal boron nitride is a low dielectric high thermal conductivity material. Because its structure is very similar to graphite and has a hexagonal layered structure, it is commonly known as “white graphene”. The material also has the characteristics of high temperature resistance. In the aerospace field. It is also used in the nozzles of airplanes and rocket engines.

The phone has a total of 8 antenna strips on the metal frame, and the bottom 5G antenna on the left is close to the charging port. This is a restricted area for smartphone heat dissipation. 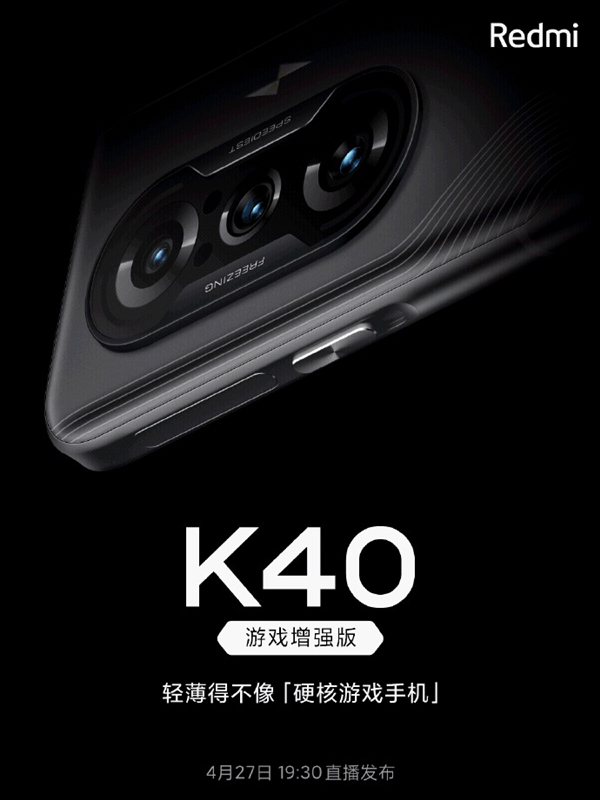 Judging from the 3C certification, the Redmi K40 gaming phone series will have at least two models, and both support 67W fast charging. Thus, we are dealing with Redmi’s fastest charging models.

Traditional graphite materials are easy to conduct electricity and cannot be used to dissipate heat in the antenna area. Therefore, for the first time, white graphene is placed in the antenna forbidden area.

Thanks to the use of white graphene, a new type of heat dissipation material, the phone can effectively reduce the temperature rise by more than 2°C in the charging scene.

At the same time, the Redmi K40 Game Enhanced Edition also passed the TÜV Rheinland High Game Performance Certification V2.0. In more than 40 tests for game performance, the machine passed all the tests with excellent performance.

The phone will also bring a unique lifting shoulder button, which can easily achieve multi-finger operation, and can also be hidden by sliding the button, turning it into a conventional flagship in seconds. 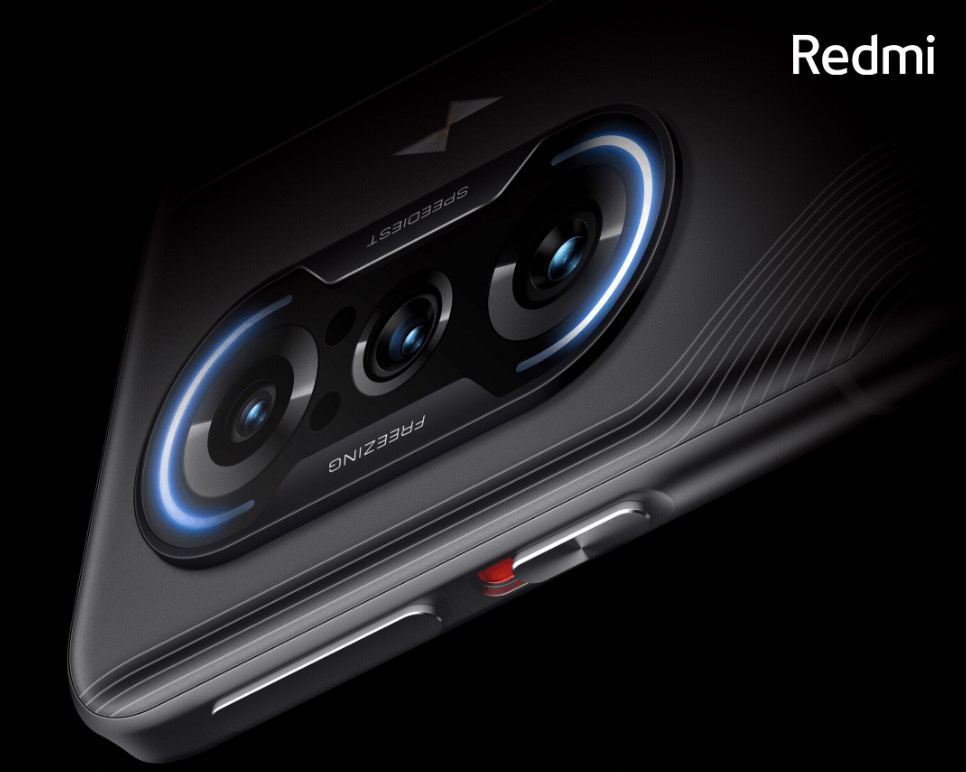 The Redmi gaming phone will sport a Samsung E4 material OLED single-hole screen, supporting a high refresh rate of 144Hz. It will also come with a battery capacity of 5000mAh. However, judging from the official poster, the machine body is very slim, the middle frame is made of metal. Thus the large battery didn’t affect its thickness. 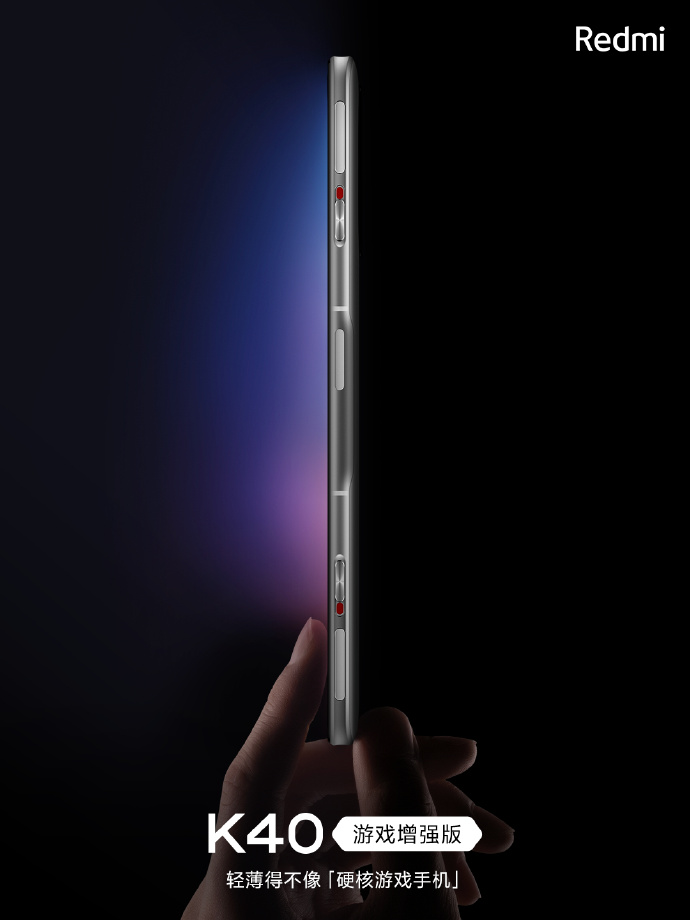