Since its first appearance on the market, the Xiaomi Mi Band has been one of the most-selling and best products in the wearables niche. It has achieved impressive results in the past generations. It is also a well-deserved leader in the global smart bracelet market, with total shipments ranking first in the world.

In April this year, the Xiaomi Mi Band 6, the first bracelet coming with a full screen, was officially launched. This device has greatly increased the screen-to-body ratio on the basis of the previous generation. The black borders on the top and bottom of the screen expand the display area.

However, it is still difficult to display more effective information on such a small screen. So Xiaomi wanted to develop a bracelet device with a larger screen area. 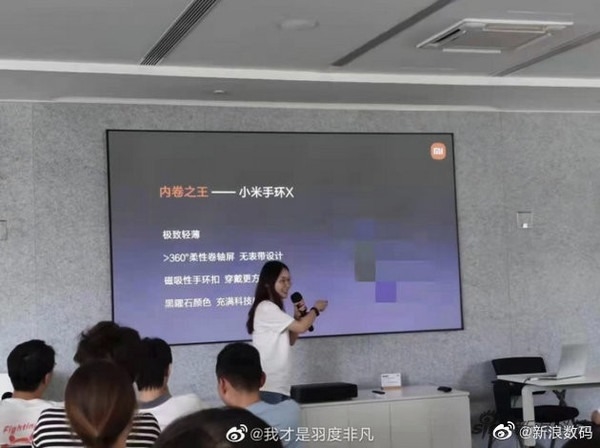 Recently, a picture of a suspected Mi Band internal plan meeting appeared on Weibo. It is obvious that Xiaomi’s internal employees are discussing a brand new product “Mi Band X”.

According to the leaked photo, the Xiaomi Mi Band X known will come with a 360° spool flexible screen. This simply means the screen surrounds the wrist strap to achieve a 360 ° screen effect. This greatly solves the situation that the display content of the bracelet screen is limited due to the size.

However, because a circle is a screen also, it cannot be worn with a strap like a traditional bracelet. Xiaomi also specially designed a magnetic bracelet buckle.

Judging from the information currently exposed, the Mi Band X is undoubtedly a very amazing product, which will subvert the presentation of the entire bracelet product line, and may create a new era like the MIX mobile phones. Unfortunately, the picture of the device has not been exposed.