Smartphones have almost entirely replaced handheld consoles for gaming, and with good reason – they often have excellent screens and plenty of power, while the App Store and Google Play Store both have a large and ever growing selection of games. But not all smartphones are good for games. In addition, there’s more to consider than just raw power – though that’s certainly a factor. There are phones like the Asus ROG Phone 5, Lenovo Legion Phone Duel, and Nubia Red Magic 5G, which are all built specifically with gaming in mind. It means they have things like extra high refresh rates, touch-sensitive triggers, cooling systems, and more.

On the other hand, there are also excellent gaming phones that aren’t aimed specifically at that market, with many top flagships like the iPhone 12 Pro and OnePlus 9 Pro also doing a superb job, thanks to their stunning screens and high-end specs. We’ve included all the best options below. Make sure to check back regularly too, as we’re keeping this article constantly updated with new arrivals.

And once you’ve picked your phone we’ve got you covered when it comes to picking games as well, with our 15 Best Games To Play

What to Look for in a Gaming Phone

Choosing the right gaming phone is a little different than finding the best smartphone. With regular phones, you might be more interested in battery life, the cameras, and a plethora of other specs, but the best gaming phones are all about their screens and processors with everything else being less important.

With that in mind, we’ll start with the processors. You pretty much want the latest chips available, which for Android are the Qualcomm Snapdragon 888, Snapdragon 870. On Apple’s side, you should look for an iPhone with either an A14 Bionic or at least A13.

The best gaming phone that appeals to non-gamers too

The Asus ROG Phone 5 is a remarkable gaming phone. Its highlights include class-leading power from the pairing of a Snapdragon 888 chipset and up to 16GB of RAM, plus a screen that has a refresh rate of 144Hz and a touch sampling rate of 300Hz. Both of which are higher than most phones and beneficial to games. The screen is big too, and it’s backed up by dual front-facing speakers. Those are among the best you’ll find on a phone. 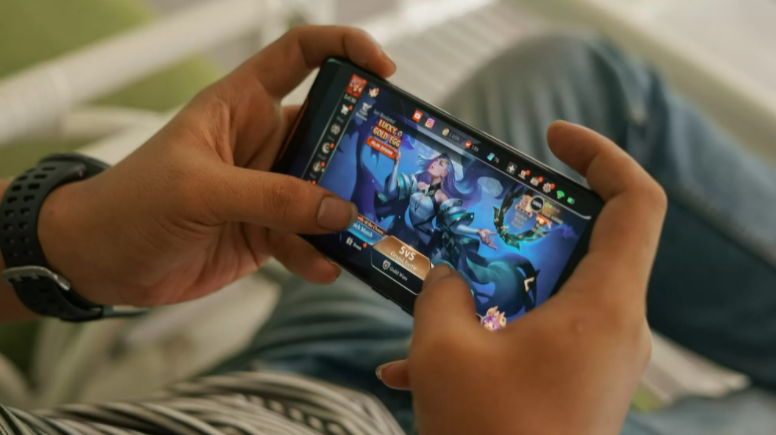 The Asus ROG Phone 5 also has a huge 6,000mAh battery. So you can play games longer, and with 65W charging you won’t be out of action for long when it runs dry. Add to that responsive shoulder buttons, programmable RGB lights, and compatibility with a range of gaming-focused accessories. The Asus ROG Phone 5 really has a complete package for gamers. It’s not quite an all-round flagship (its cameras don’t excel as much as the rest of the hardware for a start) but if gaming is your priority then this phone should be at or near the top of your list.

So many good games come to iOS, you can’t be blamed for wanting a great iPhone to play them on. When it comes to gaming on iOS, the 6.7-inch iPhone 12 Pro Max is the one to beat. The new A14 Bionic chip inside will show you just how capable it is in gaming. Apple’s 5nm A14 Bionic is one of the most powerful chipsets on the market right now. It can handle just about anything you can throw at it without a hint of stutter or lag. 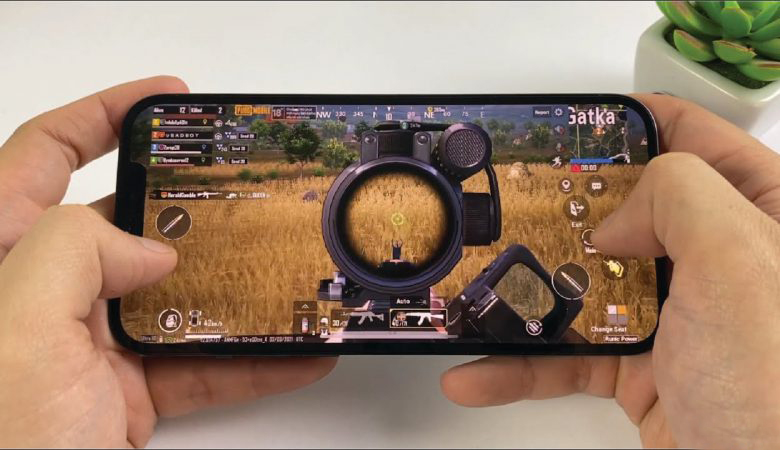 Importantly, the iPhone 12 Pro Max sports a gorgeous Super Retina XDR display that makes games look incredible on the iPhone, whether they’re free-to-play titles or the latest Apple Arcade exclusives. There’s also up to a whopping 512GB of storage available. So you can carry an entire library of mobile games in your pocket. The biggest downside is that, like the rest of the iPhone range, the iPhone 12 Pro Max is capped at 60Hz. That’s far from the buttery smooth displays of many Android rivals in our chart, but it’s a sacrifice that has to be made if you want access to the exclusive titles in Apple Arcade on the go.

Samsung’s 2021 flagships aren’t branded as gaming phones, but they are true powerhouses that offer exactly what most gamers need in a handset. Like last year, the lineup includes the Samsung Galaxy S21, Galaxy S21 Plus, and super-premium Galaxy S21 Ultra. All three Galaxy S21 models offer top-of-the-line specs, including adaptive 120Hz AMOLED displays, Snapdragon 888 (or Exynos 2100) processors, and excellent battery life. The S21 Ultra is obviously the most powerful of the bunch, with an extremely versatile setup and, for the first time, S-Pen support (sold separately). 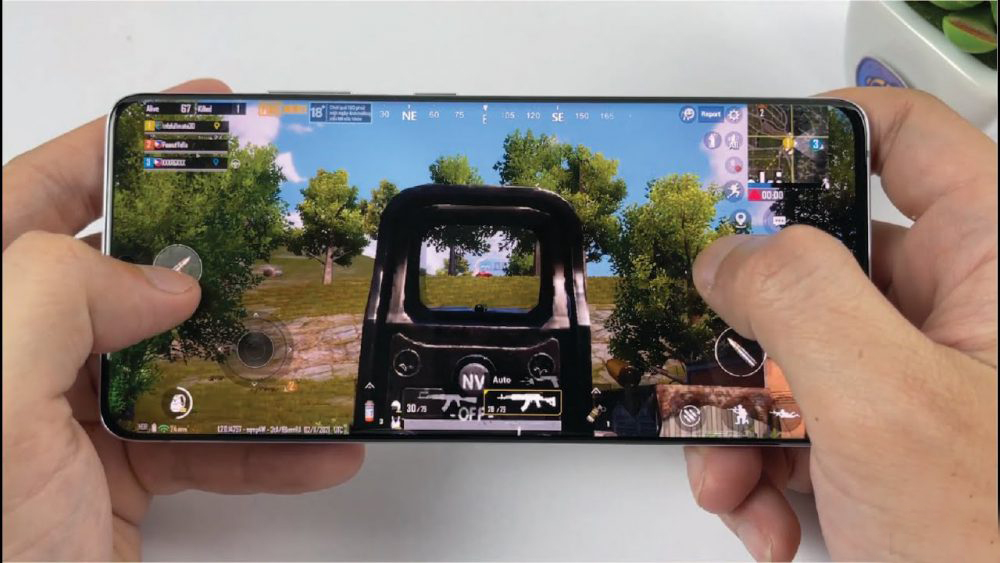 It isn’t just about the hardware, either. All three models offer Samsung’s Game Launcher and Game Tools options, allowing you to tweak performance in individual games. The Game Tools suite also lets you easily adjust resolution, take screenshots, record videos, and more. None of these phones are cheap, but any of the Samsung Galaxy S21 phones are a great choice for those looking for one of the best gaming phones you can buy. If you want to save a bit of money, you can also wait until summer for the inevitable Galaxy S21 FE model. The latter should offer the same specs at a slightly lower price point.

The Xiaomi Black Shark 4 isn’t bred for excess in quite the same way as some of its competitors, but it is certainly bred for excellence among the field of $500 smartphones. The Snapdragon 870 chipset inside may not be a top performer like the Snapdragon 888, but it is no slouch and only lags a little bit behind. Since most mobile games can run on even modest chipsets, this won’t likely be an issue anytime soon. 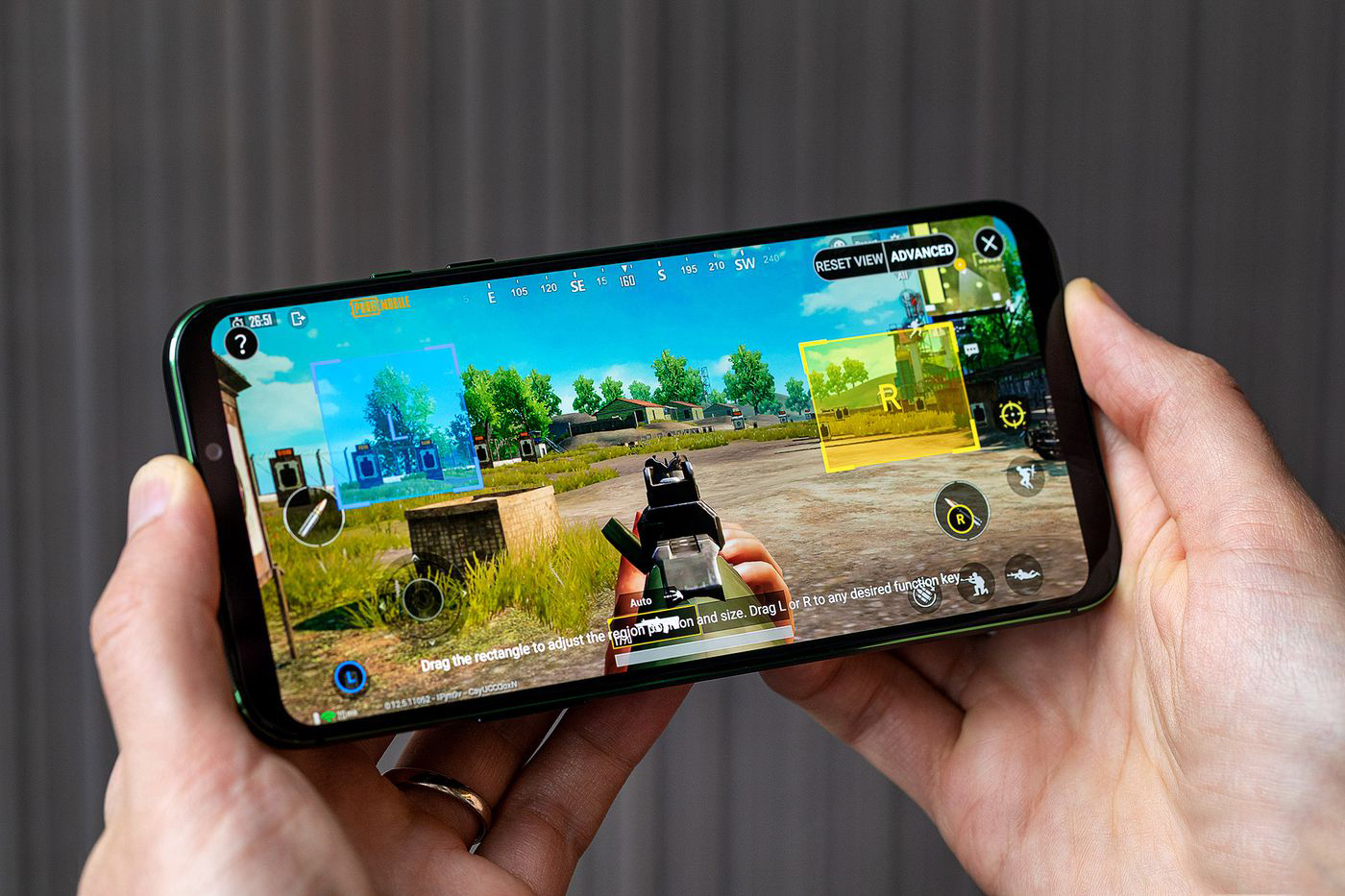 The Black Shark 4 still packs in 8GB of memory and 128GB of fast UFS 3.1 storage. And, its display is just as ready for gaming as the competitors with a sharp, AMOLED panel that can run at 144Hz. The phone also comes with something special in the form of its two magnetic, pop-up triggers. Unlike the touch controls on many competing phones, the Black Shark 4 has physical shoulder buttons that you actually get to push down. They feel great to use, and they can recess back into the phone when you’re not using them. Xiaomi also gets bonus points for letting you use the shoulder buttons as camera controls in the camera app.

The Legion Phone Duel 2 is the next step in mobile gaming evolution. It features a Qualcomm Snapdragon 888 5G mobile platform, and the twin-turbo fan cooling system that ensures peak performance. A strong battery that charges quickly will keep you gaming all day, while octa-trigger input and Dual HaptiX feedback give a console controller feel for better controls, and a high-res camera lets you create content while you play. The phone sports a 6.92-inch AMOLED display with a capacitive touchscreen at a resolution of 1080 x 2460 pixels. 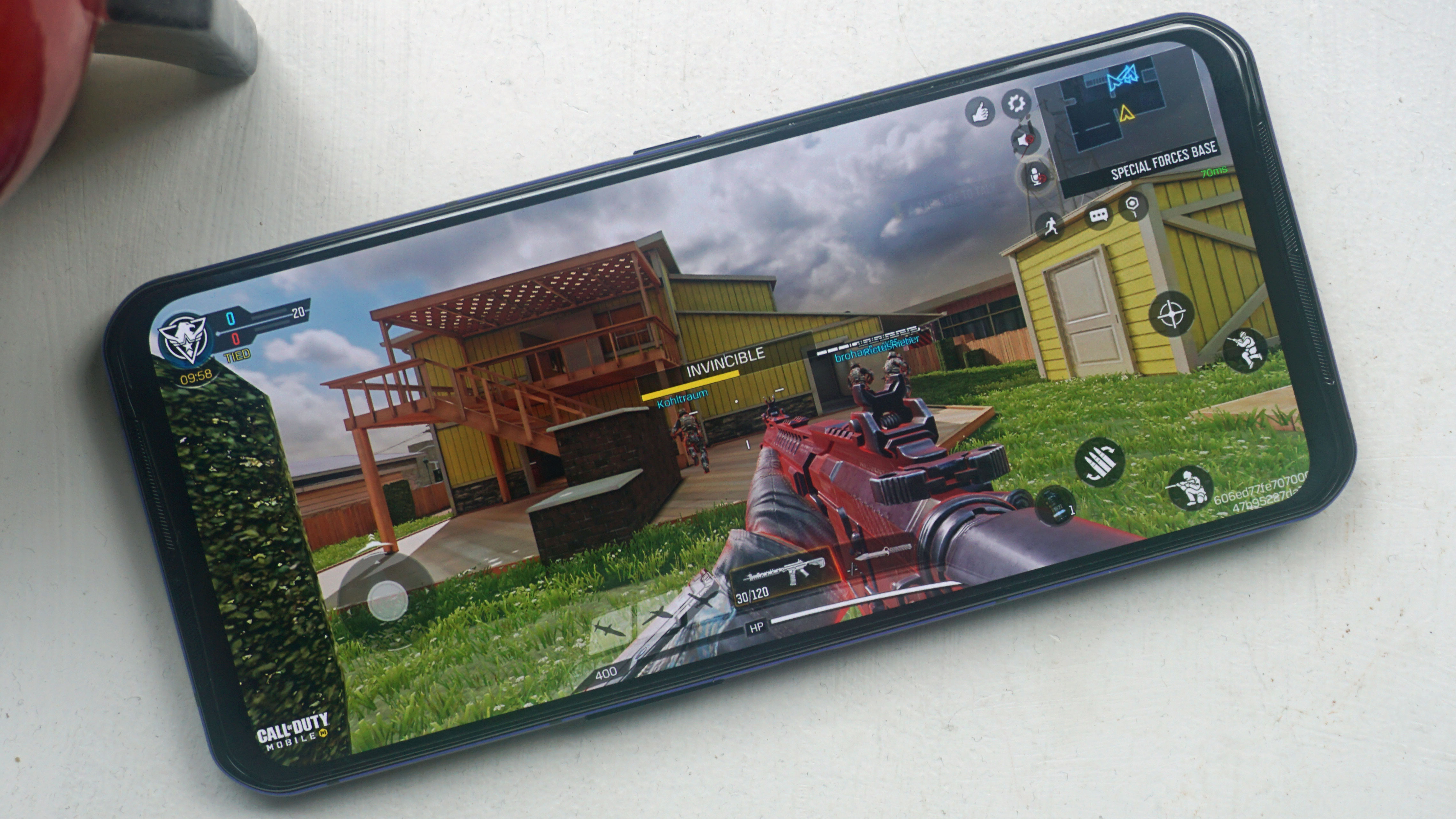 There are 12GB and 16GB RAM options while the internal storage has 256GB and 512GB variant. It’s also got a top processor and software optimized for use in landscape mode. All of these contribute to make it great for gaming. Our issues with the phone don’t touch its gaming prowess, though its high price and mediocre camera that might affect some. If you’re looking for one of the best gaming phones right now, this is up there.

Magic for gaming, less for some other things

The Nubia Red Magic 6 Pro pairs the world’s fastest refresh rate with an ultra-responsive touch sampling rate of up to 500Hz, providing the most responsive mobile gaming experience ever. You’ll see and even feel the difference.

Vivid colors and a razor-sharp resolution take your favorite games to new heights with some of the most stunning visuals in mobile gaming. With SGS’s anti-smear and Eye Care certifications your screen stays clear and smear-free, so you never lose the competitive edge and you can keep winning games for hours without fear of harming your eyes. The next generation of performance is here, powered by the Qualcomm Snapdragon 888 mobile platform, with its Adreno 660 graphics, and full suite of Snapdragon Elite Gaming technologies. You can play the most intensive games the way they are meant to be enjoyed.

When you’re in the zone, your only real enemy is overheating. Inspired by gaming PCs and F1 super racing cars, the CE 6.0 Multi-dimensional Cooling System combines 7 different heat transfer and cooling methods to create a better than flagship level of cooling system. Where other devices will start lagging mid-game, the Red Magic 6 Pro will keep going at max performance.

The OnePlus 9 Pro is a great all-round flagship, but it also has a feature that we’d more expect to find on a gaming phone. We’re talking about Hyper Touch, which can boost the touch sampling rate from an already-high 240Hz to 360Hz. It makes the screen extraordinarily responsive to inputs – which is ideal when playing games. Beyond that, the OnePlus 9 Pro also has all the power you should need for gaming, with a high-end Snapdragon 888 chipset and up to 12GB of RAM.  And games are sure to look great on its 6.7-inch 1440 x 3216 AMOLED screen with a refresh rate of up to 120Hz. 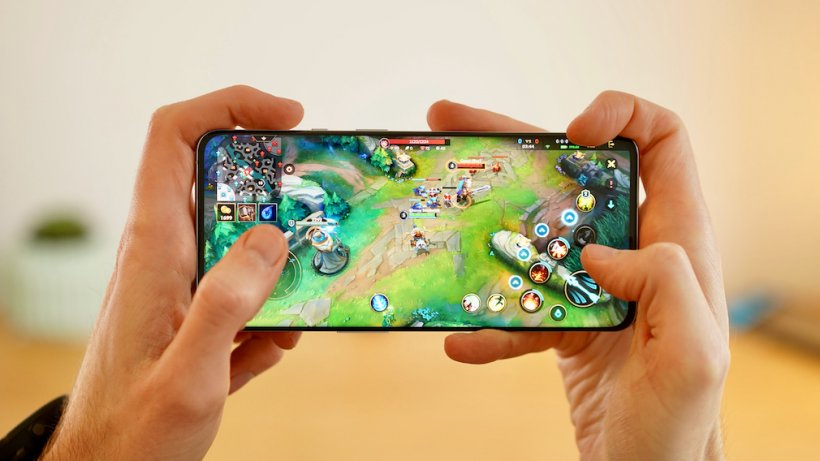 It also supports 65W charging (and 50W wireless charging), so you’ll never be out of juice for long, and with 5G you can game online on the move. There’s also up to 256GB of storage. So there’s plenty of room to store all your games on the OnePlus 9 Pro.

P.S. The Redmi K40 Gaming Enhanced Edition is a new phone. So we need more time to understand whether it is a genuine gaming smartphone.