Not many people know this but Xiaomi’s MIUI was born even before Xiaomi had any phone to slap its skin on. But 10 years down the line, Xiaomi’s skin that runs on top of Android is now used by over 400 million users around the world. Known for being decked with innovative features, MIUI has often inspired features which eventually made it to other Android skins.

Between then and now, a lot has changed and MIUI is no longer a custom ROM developed for the Google Nexus One. It’s a full-fledged skin that’s on millions of devices out there and it also happens to be amongst the most feature-rich.  Now, with MIUI 12, Xiaomi is taking forward a step in the same direction and is further pushing the experience with a bunch of new features and optimizations.

So, in case you’ve got a handset with MIUI 12 or are just curious about what the software has to offer, here are  features we like most in MIUI , especially in MIUI 12 that we think you should definitely know about.

If the last few years have taught us anything, it’s that any of us can fall victim to an unsuspecting data breach. Most of us are unaware of this. However we give away a lot of information (like location) with the images that we share on social media. Fortunately, MIUI 12 has a feature that allows you to share your images without location and metadata. Neat indeed! 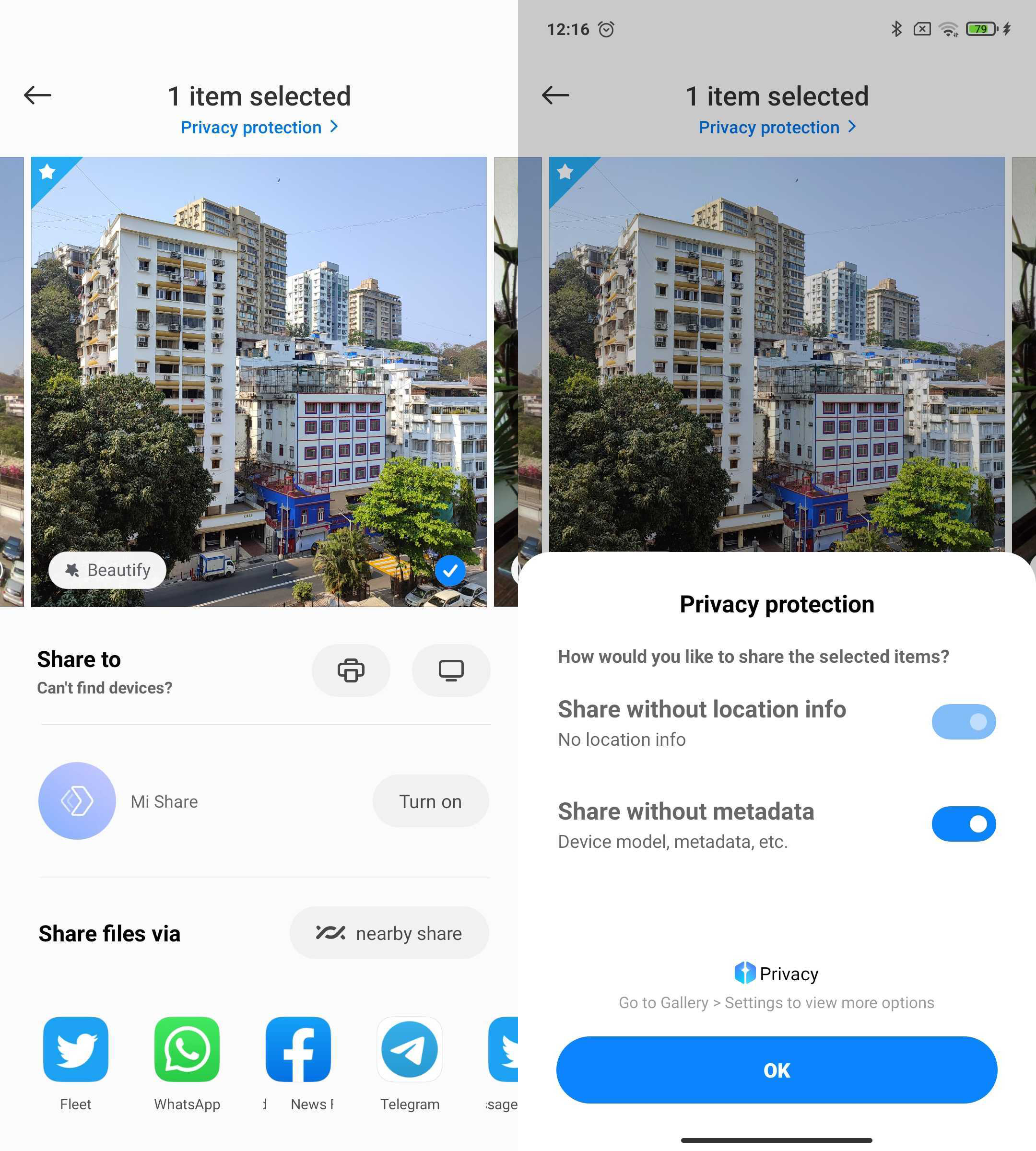 Android isn’t particularly smart about media volume in that it doesn’t automatically adjust it based on which app you’re using. Thankfully, MIUI’s Sound Assistant lets you do just this. For instance, you can reduce the volume of Facebook while letting your music play at higher volumes in the background. It’s a really neat feature and I’m surprised more OEMs haven’t thought of it. 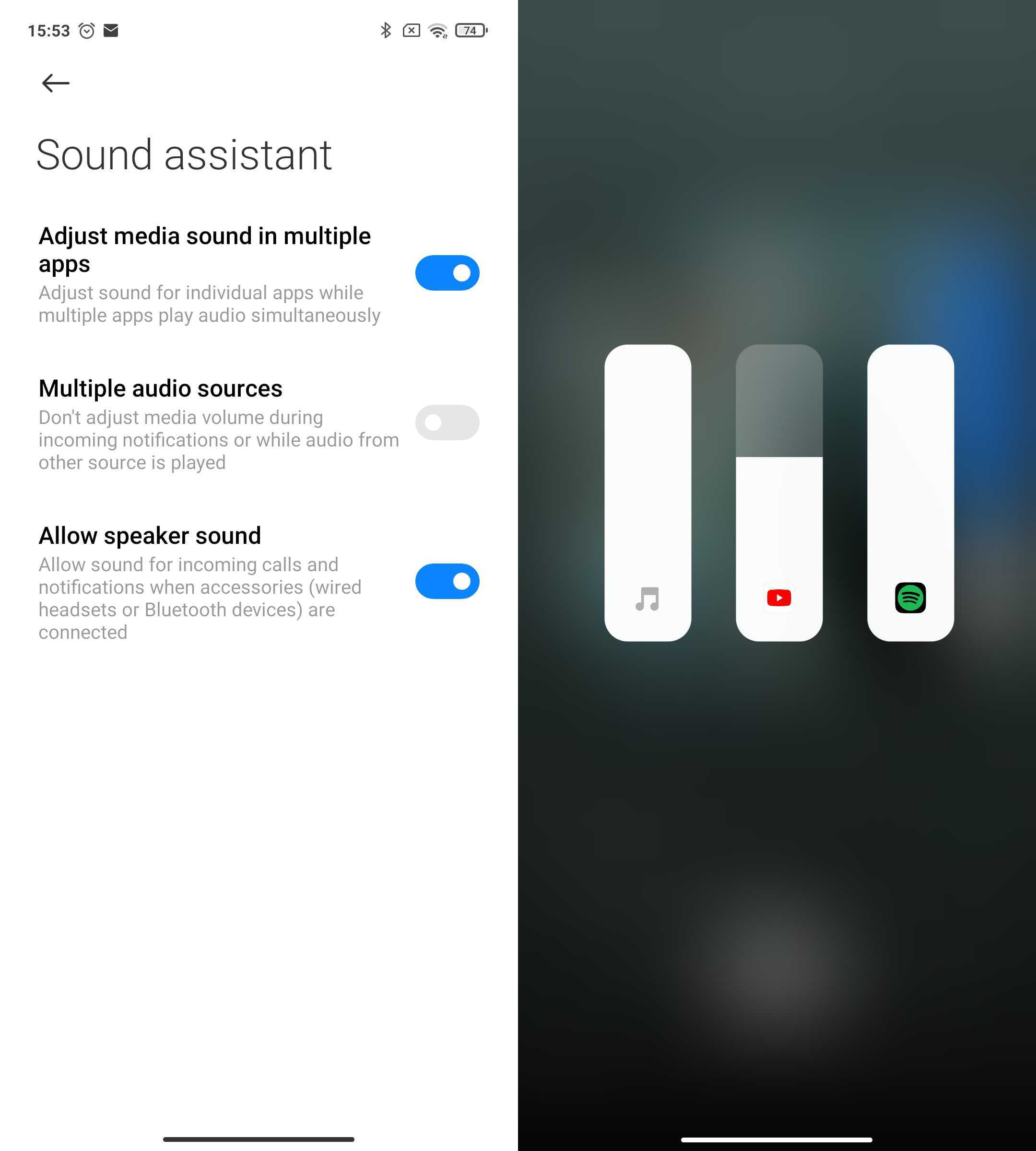 We think this is something that you’ll notice from the get-go. MIUI 12 is extremely fluid and the new animations that Xiaomi has baked in make the experience much smoother. Everything from accessing the animation panel to navigating in-app menus feels much more responsive; even so more on the 90Hz display of the Mi 10.

Adding to the experience is the cleaner design that has been embraced by the new skin. MIUI 12 doesn’t feel as cluttered as its predecessor and the new aesthetic changes, such as the refreshed icons, are rather pleasing too.

Xiaomi has also made a conscious effort to make information more visually accessible. What I mean by this is that information such as ‘storage usage’ is now served with a cylinder. Tha latter makes use of coloured sections to give you a visual representation of what’s taking space on your phone. Such visual cues are littered elsewhere too; for instance, the battery usage charts.

MIUI 12 improves on multi-tasking by adding floating windows. When navigating using the full screen gestures, floating windows for apps will help users easily move them, close or resize them with gestures. If you get a message while on you’re doing something else on your phone like watching a video. You can open up the message in a floating window allowing you to reply without having to pause the video and switch over to the messaging app.

One of the new UI changes in MIUI 12 is the addition of a new Control Center. As you may have guessed from the name, it is very similar to how the Control Center works in iOS. You pull down from anywhere on the home screen, and you get a grid of toggles, brightness slider, and options for toggling Wi-Fi, Bluetooth, and cellular data.

The design and usability is identical to iOS, but at least here you get the option to change the layout of the quick settings tiles. Because it takes up so much room, notifications are now bundled into their own pane. A pull down from the top of the screen now shows the notification shade, and I don’t like the fact that the toggles have been decoupled from notifications. Having said that, it is convenient to access the Control Center as all it takes is a pull-down gesture from anywhere on the home screen.

The best part about this is that if you’re not a fan of the new style, you can easily switch back to the older MIUI 11 layout from the settings. As for incoming notifications, you can choose from the default MIUI system or switch to the Google-prescribed method.

Similar feature functionality has been brought into other system apps also and is being called as layered apps. For example, if you close the gallery app, it will showcase a sunrise in the UI logo for the app.

The drawer has a lot of similarities to the POCO Launcher, including app categories that automatically sort apps into various categories. You also get app suggestions at the top, a search bar at the bottom. And  also you can set up custom categories. There’s also the option to change the background transparency.

Inside of the camera app of MIUI 12, the company has added a Magic Clone feature that will allow users to take images and videos of themselves along with their clones in them. As of now, this feature is only being made available on the Mi 10 and will roll out to other devices soon.

MIUI 12 users can cast anything that they do on their phones on to a TV that supports MiraCast. It also allows users to use the private casting feature that allows them to receive messages and calls, without them disturbing the cast.

A lot of us don’t use a separate phone for work and this makes it easy to feel overwhelmed when you’re trying to spend some quality time with family or friends. With Second Space, MIUI 12 allows you to create a completely separate area — literally a “second space” — within your phone so you can cut out some of the noise. While you can import apps and data from your first space, Second Space is a blank slate that could be set up just for work apps. The best part about this feature is that you can assign a lock code/fingerprint to each space and jump into the one you want, right from the lockscreen.

It’s convenient to control smart appliances with Google Assistant, but sometimes it’s even handier to have quick access to them on your screen. And that’s what MIUI offers — Google Home integration right in the control center. You can even customize the order of compatible devices and select which ones show up.

This is one feature that is more useful than it sounds. We take a lot of screenshots on a daily basis and not all information within them is suitable for sharing. MIUI has a built-in blur tool that can be accessed when you take a screenshot. You can not only select a blur pattern but also change the brush size.

For many of us, our smartphone is the only console we own. And MIUI’s Game Turbo can really improve the gaming experience. It not only lets you optimize settings for each game beforehand but also offers a wealth of features that you can  access while gaming. Some notable ones include access to the browser, voice changer, screen recording, and casting. It also lets you free up resources by clearing background processes with a single tap.

Let’s face it. Be it threads on Twitter or articles on the web, we read a lot on our smartphones and that’s not good news for our eyes. Although Reading Mode doesn’t drastically improve the experience, it does make it a tad easier to read by reducing blue light, using warmer colors, and adding a paper-like texture. You can even configure it to switch automatically.

While there are plenty of third-party tools that let you run two instances of the same app, MIUI 12’s implementation is simple and works well. You can use this feature to create a copy of an app like WhatsApp that doesn’t have support for multiple accounts. Since the duplicate app is sandboxed, it doesn’t interfere with the original in any way. 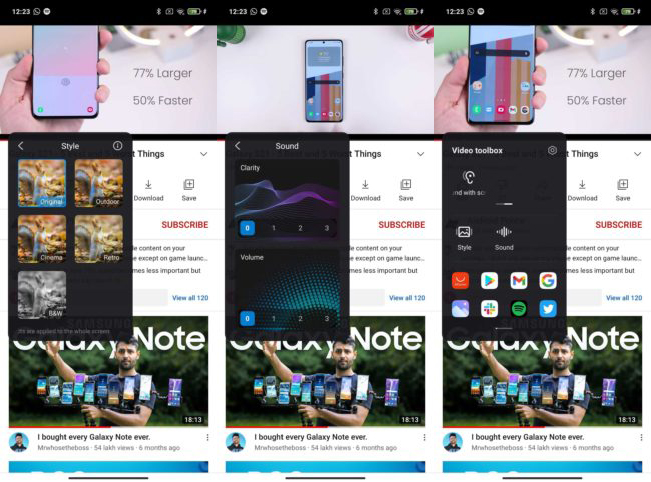 Video toolbox isn’t new in MIUI 12, but it’s one of the most underrated features in Xiaomi’s skin. While using an app like YouTube, you can use the toolbox to tune video and audio output. More importantly, it also lets you play sound from these apps with your screen turned off. This could come in handy if you want to listen to a YouTube video without having to keep the screen unlocked .

Android comes with unique multitasking features, but MIUI 12 takes it a step further with floating windows. You can quickly open an app in a floating window by long-pressing a banner notification and swiping down. These floating windows can be minimized, expanded, and shut down with simple gestures. There’s no need to quit the app you’re currently using to access another one. 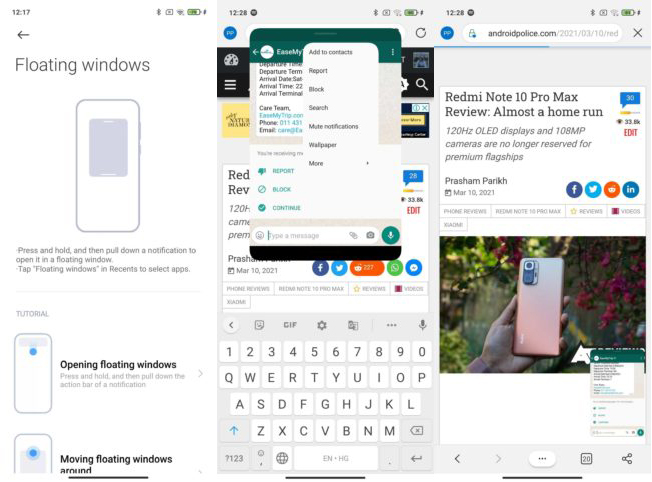 The built-in File Manager in MIUI is one of the best around, and it is getting a few new features in MIUI 12. There’s a new interface that makes it easier to see recent files. And the grid layout has modern icons for folders. But the key change here is a sort option that lets you arrange folders by name, size, or creation date.

If  you have always had an irrational fear of your phone dying when you need it the most. This is why you  will appreciate smartphone manufacturers, such as Samsung, who have thoughtfully included ultra battery saving modes for times when all you want is your phone to last longer.

Well, with MIUI 12, Xiaomi is now bundling in its Ultra Battery Saver Mode which drastically improves battery performance by reducing background applications and services and by limiting the applications you have access to. You can choose up to 6 applications of your choice over and above Phone, Contacts, and Messages.

MIUI 12 gets new features to help you improve your fitness and mental wellness. Starting with the former, the pre-existing, built-in step counter is now supplemented by automatic tracking for running, cycling, and stair-climbing. Furthermore, there’s a new sleep tracker that records the time and quality of your sleep based on the movements and sounds you make at night. It uses the microphones on a Xiaomi or Redmi smartphone to record your snoring and any sounds you might make while sleeping to account for REM sleep. In addition to tracking workouts, the Mi Health app also tracks the number of times you stood up and sends you sedentary reminders if you haven’t moved around in awhile.

When it comes to mental wellness, Xiaomi has also redesigned the Screen time dashboard with new graphs for daily and weekly usage. Additionally, as we saw in a leaked MIUI 12 build, you can now add a custom time duration for the Focus Mode. These features aren’t yet available in global builds and are substituted by Google’s Digital Wellbeing. However, Xiaomi’s own version is visually pleasing – although, once again, fairly identical to screen time feature in iOS.

There’s a lot of emphasis in MIUI 12 to apprise users of the permissions accessible to any app. These prompts for every time an app requests access for the camera, microphone, or location are shown in big fonts and occupy nearly one-third of the display. In addition, when you launch a system app for the first time, MIUI 12 commands your attention towards the information the app will be accessing. This feature has been named “Barbed Wire” by Xiaomi for its protective nature.

In addition, there’s “Flare” which raises an alarm every time an app is trying to use the camera, microphone, or location without your permission. This feature also maintains a log of every time any app uses certain permission.

Finally, there’s another feature called Mask System, which returns dummy or empty messages by default when any third-party application is trying to access your call log or messages. This is done in order to prevent untrusted apps from reading your private data.